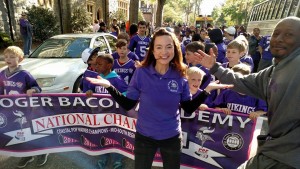 Jean Lafave– also known as Coach Jean— has earned the 2016 Female Volunteer of the Year Award for the Mid-South Region of the Pop Warner athletic program. This is particularly impressive, as the Mid-South Region includes seven states— Alabama, Kentucky, North Carolina, South Carolina, Tennessee, Virginia, and West Virginia— meaning that of hundreds of volunteers in each state, Lafave was chosen for the 2016 award.

Lafave’s Charter Day School cheerleaders are current National Champions, which is the 7th National Title earned by the school. Lafave works with 11 squads, volunteering several evenings each week and nearly all weekends.

We congratulate Coach Jean and thank her for making athletic opportunities possible for so many students!