Leland cheerleaders leap to the top of the nation 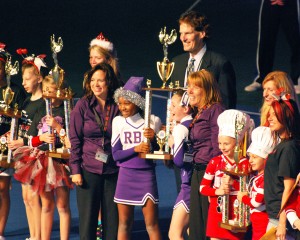 Unbelievable routine and stunts for 9, 10 and 11 year old girls!

ORLANDO, FLORIDA: December 10, 2011 – Precise movements, school spirit, contagious enthusiasm, vocal articulation, spiraling jumps, unbelievable stunts, team pyramids, individual safety and crowd appeal are all part of what is intensely scrutinized by five national Pop Warner cheerleading judges. And the cheerleading teams only get one shot to show their stuff. One shot was all that was needed for The Roger Bacon Academy’s Junior Pee Wee medium intermediate cheer squad to take home the national championship on Monday December 5, 2011. They not only received the highest award, the squad which is composed of 9, 10 and 11 year old girls were also awarded the “Spirit of Sport Award” for sportsmanship.

“I am so unbelievably proud of our cheer squad for this monumental accomplishment of winning the national championship!” said Jean LaFave Pop Warner cheerleading coach and coordinator for The Roger Bacon Academy. “And I am equally as thrilled with them winning the sportsmanship award. It’s the best of both worlds to compete well and do it with a great attitude,” she added. 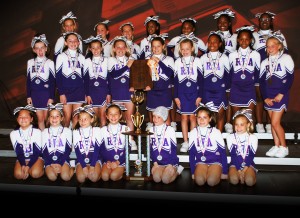 “These girls left everything they had on the mat,” said Cathi Mintz mother of cheerleader Abby Mintz and assistant coach for the championship cheerleading team. “It’s all about heart when you’re competing on this level and they were able to handle all the pressure, keep their wits about them and perform a near flawless routine,” she said.

“What makes it even more special is that there are no tryouts for our cheer teams here at RBA,” Mark Cramer, Superintendent of The Roger Bacon Academy school’s stated.  “If a student is willing to work hard and commit to the team they will become a Viking cheerleader. Winning the national championship is a testament to their dedication, hard work and following the lead of their coaches.”

There will be a campus wide celebration for the cheerleaders on Friday, December 16that 11 a.m. The event is open to the public. 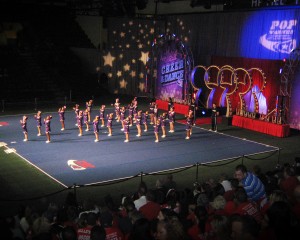 The RBA Vikings Cheerleading Squad consists of over 120+ current and previous students from the Charter Day School ages 5-15. The purpose of cheerleading is to follow the school pledge, promote school spirit, support our teams, foster good sportsmanship, and encourage the competitive spirit. The team coaches strive to develop the student’s personal development of poise and self-confidence.

Cheerleading was officially recognized in the 1970’s, but has been a part of the Pop Warner program for several decades. The first ever National Cheerleading competition was held in DeKalb County, GA. Today, more than 180,000 children are participating in Pop Warner cheerleading and dance around the world. Participation in the Pop Warner Spirit Program provides kids an opportunity to perform in an organized, supervised, safety-oriented environment. Pop Warner programs emphasize fun for all and encourage the development of qualities important long after Pop Warner days are gone.