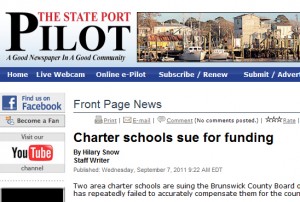 Two area charter schools are suing the Brunswick County Board of Education, claiming it has repeatedly failed to accurately compensate them for the county students they serve.

Charter Day School Inc., which runs Roger Bacon Academy near Leland, and Columbus Charter School in Whiteville filed a lawsuit against the Brunswick County district earlier this summer for allegedly miscalculating their share of local funding each year for the last decade.

Together, the two schools serve about 1,200 children residing in all five counties. According to the Brunswick County Schools (BCS) lawsuit, the charter schools were unaware until recently that the district had consistently violated the calculation of per-pupil appropriations, as mandated by state law, since 2001.

The plaintiffs argue that at the close of the 2010-11 fi scal year, district offi cials informed them of the current rate of reimbursement—$2,362 per student.

“Prior to 2011, the charter schools were not given any information by BCS regarding the per-pupil calculation determinations made by BCS and therefore were not reasonably able to discover any violations by BCS of its statutory funding obligations until 2011,” the charter schools contend in the lawsuit.

Under N.C. General Statute 115, school districts must annually transfer, from local current expense funds, per-pupil expenditures for each student who attends a charter school instead of a traditional public school.

Roger Bacon Academy has a student enrollment of more than 820 and Columbus Charter, about 360. Nearly 500 Brunswick County children in kindergarten through eighth grade attend one of those charter schools.

The local current-expense appropriation is defined in the law as including supplemental tax revenue, county contributions and state money disbursed directly to a school district. Charter Day School Inc. and Columbus Charter School allege that district officials paid them from “Brunswick County sub-funds, not the total … required by the provisions of Chapter 115C.”

According to the legal complaint, per-pupil local current expense appropriation should be determined by adding the total revenue—from federal, state and local sources to the previous year’s fund balance—and then subtracting the cost of textbooks. That amount is then divided by a school district’s student population.

The plaintiffs in this case maintain that BCS officials did not calculate charter school reimbursements using the designated formula.

They claim they had “made demand upon BCS” for the total amount due prior to filing suit but the district “failed and refused to pay that amount.”

Charter Day School Inc. and Columbus Charter School are now seeking recovery of at least $10,000, an amount that puts the case in Brunswick County Superior Court.

They are also asking the court to order that the local district provide an annual budget summary— including current-expense appropriations, student population data for traditional and charter schools—to the plaintiffs so they may determine whether the per-pupil allocations are “equal, as required by law.”

Brunswick County Board of Education members met in closed session last week to discuss the lawsuit but said they could not comment on ongoing legal matters.