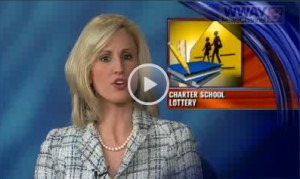 Charter schools have developed a reputation of offering an academically well-rounded education to students for free. But many students get turned away because of a state cap put in place.

Today, Roger Bacon Academy’s Charter Day School in Leland held a lottery to determine who made the coveted list.

Eighty-nine out of 235 applicants were chosen, while others landed on a waiting list. Mother of three students Kelli Hendrix is left with mixed emotions.

“I’m excited that we’re going to sixth grade, and I’m very hopeful that we will get called for second grade, so that all of my children can be in one school,” she said.

Parents of sixth graders got some surprising news as there were just enough spots for all interested students.

“We are very lucky, and I guess patience paid off, and we’re glad he’s going to be going into Roger Bacon in the sixth grade,” parent Robery Migliosi said.

Not all emotions were positive.

“There was a parent sitting next to me, and unfortunately she didn’t get a chance to get in directly,” Migliosi said. “She got put on a waiting list, and I feel sad, because I feel like her child is going to be left behind a little.”

Kids are turned away from charter schools every year because of a cap put in place by the state Board of Education.

“Dissolving the cap has been one of the planks of the Republicans that have taken over the General Assembly this year, but in addition, we need to make charter schools free of domination by the state Board of Education,” Charter Day School trustee Baker Mitchell said.

School leaders are hopeful one day this random choosing will end.

“It’s just unfortunate that a parent and their child’s education is determined by purely chance and a lottery,” Mitchell said.

Several state lawmakers including New Hanover County’s Sen. Thom Goolsby are pushing for legislation that would lift the cap currently on the number of charter schools allowed and students admitted.