In the 2009-2011 time-frame, the General Assembly set a minimum academic performance criteria for charter schools. Charters that do not score above the minimum are subject to sanctions and eventual closure.  However, new testing standards have changed the meaning of this old criteria, and it needs to be re-calibrated.

This minimum criteria was based on the percentage of all End-Of-Grade tests that were passed by the students. The idential tests are given to all public school students – traditional and charter students.  Most students take two tests – math and reading – and some students take a science test in addition.  The “performance composite” for a school is the number of tests passed divided by the total number of tests taken at the school expressed as a percentage.  The General Assembly set the minimum performance composite criteria for a charter school to be 60%.

To see how this 60% criteria compared to the overall set of all NC public schools refer to the first graph below.  As you can see only about 150 of all schools state-wide scored below the 60% level.  The huge majority of all schools scored above 60% according to DPI data for 2011-12. 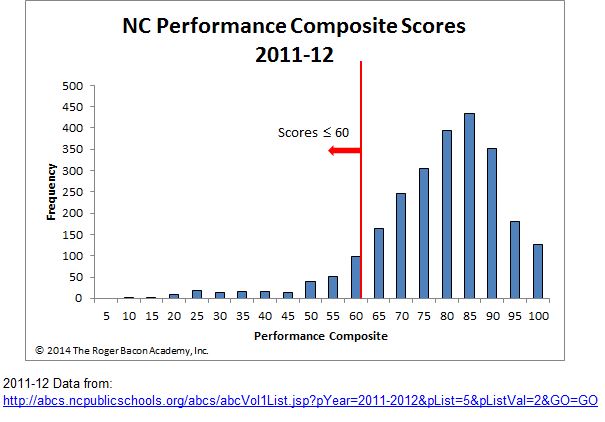 The 60% criteria was established  prior to the massive changes in the testing change-over to accommodate Common Core. At that time as the above graph shows, most schools scored in the 75-95% range and the 60% was set as a minimum level for charter schools to achieve.  These facts are illustrated in the first graph above for 2011-12.

After the change in testing for the new Common Core curriculum, the new tests slid the distribution nearly 40% points lower as seen on the second graph below. Most schools scored in the 35%-55% range. Without recalibration, the 60% criteria for charter schools now represents an achievement level reached by only a very few schools in the state. An equivalent criteria based on state-wide performance in 2012-13 would be 20% – not 60%. 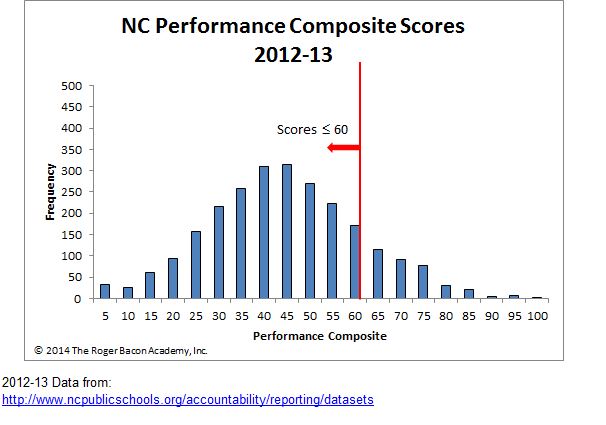 Data for 2013-14 supports this analysis and should be used to set a new criteria calibrated to be equivalent to 2011’s 60% but adjusted to recognize the new testing scores. 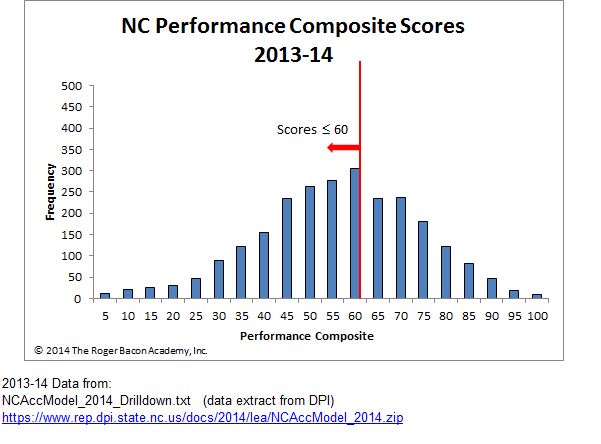 When the Tests Change, The Criteria Must Be Re-calibrated.

There should be no attempt to reduce in any way the academic accountability of charter schools, but when the yardstick is changed, as happened with the new tests, the numerical  measure should be recalibrated to the new measurement standard.  An even more prudent and equitable method would be to base the criteria on the performance of the surrounding schools in the charter’s home area.