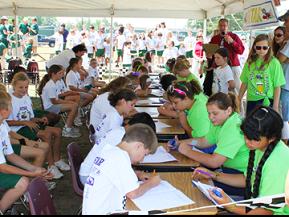 Leland – 2013-14 End-of-Grade (EOG) score reports, released by the State today, reveal both of The Roger Bacon Academy’s (RBA) EOG-eligible charter schools were the top scorers in their respective counties. Charter Day School in Leland was Brunswick County’s top performer, while Columbus Charter School in Whiteville was the top scorer in Columbus County.

The company manages two other public, tuition-free charters that did not take EOG tests in 2013-14, as South Brunswick Charter in Southport only opened this July, and Douglass Academy in Wilmington served grades K-2 in its first year. EOG testing begins in grade 3.

Columbus Charter School in Columbus County was the county’s top-scoring school and outscored both state and county averages in every subject area as revealed by the data. Established in 2007, Columbus Charter School currently has 891 students in grades K-8. Their students scored “Proficient” on 61.7% of all tests taken in English, math, and science, which was the highest of all schools in the county. More staggering is their performance compared to the county’s— a full 18.2 percentage points higher—than the county’s 43.5% proficiency rate, which fell nearly 13 percentage points below the state average.

This year’s score report further confirms the consistent success of the charter schools’ academics, as it adds another year to the list of county-topping EOG performances.

Charter schools are open enrollment, tuition-free public schools, just as traditional district schools are. Schools managed by RBA also have diverse student populations. The student demographic makeup of Charter Day and Columbus Charter schools shows that 12% to 15% of the students have special needs and over 35% are economically disadvantaged. For example, Columbus Charter School, in Whiteville, serves double the percentage of Special Education or Exceptional Children (EC) than do NC traditional public schools when combining the students with Individual Education Plans (IEP) and accommodations under Section 504.

Baker Mitchell, Founder of The Roger Bacon Academy, attributes their high scores to a dedicated, highly- trained staff and a rigorous classical curriculum and to the unwavering support of the Board of Trustees of Charter Day School, Inc.

Robert Spencer, a spokesman for Board of Trustees, said, “With results like these delivered by our partner The Roger Bacon Academy, Inc., every parent of school-aged children, especially in Brunswick County, should send their children to us to be educated, it would transform southeastern North Carolina into a shining success story for all of North Carolina to see and replicate.”

“Our charter calls for a traditional classical curriculum, which we believe best prepares our students for the variety of challenges they will face in our rapidly changing society,” explained Mitchell.

“Furthermore, public charter schools receive less funding than district schools, so the higher scores from these traditionally taught, but lesser-funded, charter students should be viewed as another advantage of a classical curriculum,” he stated.

This funding disparity refers to current financials that show charters received 27% less per-pupil funds than district schools in 2013. For example, CDS students who outperformed district students on EOGs by 17.3 percentage points received $7,502 dollars for every $10,156 received by a Brunswick County District school student.

“We are always ready to cooperate with other schools and share best practices, but that has not happened in Brunswick County since Superintendent McGee left,” Mitchell said. 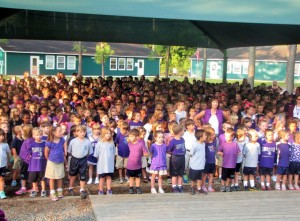 In fact, current the Brunswick County Superintendent, Edward Pruden, declares his adversarial attitude towards charter students in a video message on school choice—“As to that competition,”  he says—“game on.”

With another year’s performance results released, perhaps he should at least “show up.”

Charter Day School and Columbus Charter School are controlled by the Charter Day School, Inc. non-profit board of trustees and are operated by The Roger Bacon Academy. They also operate Douglass Academy in downtown Wilmington and South Brunswick Charter School in Southport. These are all tuition-free, public schools open to every North Carolina child.