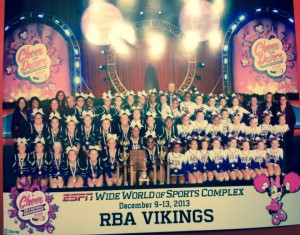 Broadcast live by ESPN’s Wide World of Sports from the HP Pavilion in Orlando, viewers across the country saw a Roger Bacon Academy Cheer Squad take the First Place trophy in front of 40,000 parents and fans for the third year in a row.

Over 8,400 athletes were competing on 400 teams throughout the week while parents and fans jammed the HP Pavilion on Thursday night for the final ESPN televised competition, according to Jon Butler, Executive Vice President of the competition.

The entire nation now knows what is being achieved in Leland, North Carolina, at The Roger Bacon Academy by Coach Jean LaFave and the other volunteer coaches and their athletes.

Earlier in the week, the Vikings Junior Pee Wee team, ages 8-11, took 6th place in the National competition. Waiting their turn on Thursday night, the two remaining Viking teams, Pee Wees, ages 9-12, and Midgets, ages 11-15, had divided their time between doing their homework in the hotel and practicing their routines in the arena. The pressure was on to bring home a national championship for the third straight year.

The tension was especially high because a Roger Bacon Academy Viking team had taken home a First Place National Trophy in 2011; and in 2012, this was repeated with the First Place National Trophy in Level 4, the most highly skilled division at the event. It was now up to either the Pee Wees or the Midgets on Thursday night to bring home to Leland the national championship for the third year in a row!

Head Coach Jean LaFave, who organized the Viking Cheer Teams nine years ago, summed up her attitude before the competition, “I don’t need the title to know that these girls, from all squads, are champions inside and out. And our Pop Warner volunteers are the most intense, invested, and hardworking people I know. I see the value of their sacrifice in the faces of all these kids, and I love it!”

In front of the ESPN cameras and more than 40,000 parents, the Level 4 division Pee Wee squad thought they had performed a near flawless routine. But the tension grew as the fourth place winner was announced, then third, then second, with no mention of the Vikings. The stadium was deathly quiet as they awaited the announcement of the First Place champion. Had something gone amiss? But relief, combined with excited disbelief swept through the team and coaches and parents as the winner was announced. The team had done it; they had captured First Place! A National Championship for the third straight year!

Now the pressure was off of the Midgets. With the Pee Wee team bringing the third national trophy back to Leland, it was to be a fun exercise for these veteran expert athletes about to go out and perform their triple sets of pyramids in perfect synchrony. With a handful of girls affectionately referred to as the “midget seniors”, the Vikings took the floor with an unprecedented arsenal of skill and talent that had taken shape as this team smoothly blended their experience with the enthusiasm and excitement of the program’s future leaders. 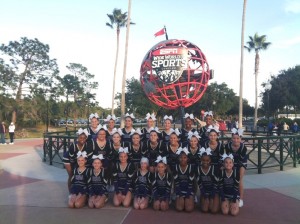 These veteran Viking Midgets executed a show stopping routine that not only solidified the second title as National Champions that evening, but they also managed to captivate the judges who awarded them the highest total score in this most advanced Level 4 division, truly crowning these athletes as the best of the best in the nation! “There was no better way for me to end my cheer career as an RBA Viking cheerleader, and when we got the highest overall score, it was the icing on the cake,” stated eighth grader Charly Fischl, a five year veteran.

The newer members were enjoying the excitement of realizing their contributions to a top title for the first time. The winning tradition of RBA Cheer may have been summed up best by RBA Viking Pee Wee Champion Allainah Hancock, “If you believe it, you can achieve it.” The older girls seemed to pass this confidence down to their younger teammates. The Vikings capped off the day by adding the Spirit of Sport award for sportsmanship to their 2013 accomplishments.

The RBA Vikings organization began nine years ago when Coach Jean and a few teachers realized that there were only a few of the students in the school involved in Pop Warner. “It seemed like a perfect fit”, stated RBA Vikings President and Art Instructor Daryl La Fave.

LaFave said that the Roger Bacon Academy promotes building the students in body, mind, and spirit as stated in the school pledge of the 924-student K-8 Charter Day School. This ideal embraces the mission of Pop Warner whose goals and philosophies focus on creating young men and women of character by developing sound mind, body, and character, proclaiming that academics and athletics go hand in hand. “When we approached the school’s founder, Baker Mitchell, he loved the idea, and the RBA Vikings were born.”

The Vikings could not have enjoyed such success without the support of many great volunteers at the local, regional, and national level. One of such amazing volunteers is the local Coastal Pop Warner President, Denise Mintz. “Coastal Pop Warner is in awe and overwhelmed at the accomplishments of the RBA Vikings Cheer program. While many would have been content winning 1st place once, the Vikings have managed to place 1st three years in a row, not by staying in the same level of performance but by increasing the difficulty and challenging themselves to be better than the year before,” said President Mintz.

“This commitment is also evident in the classroom as the Vikings consistently submit the most Scholastic All American Applications yearly and to date have won more scholarships at the National Scholastic Banquets than any other association in our program. We are grateful to the coaches’ diligent dedication to the philosophy of Pop Warner Little Scholars and Coastal Pop Warner; but most of all, we are thankful for the parents who share their children with us year after year. I am honored to say they are an integral part of our program in Coastal North Carolina and would venture to say if Pop Warner Little Scholars, Inc. needed a visual model for their academic mission statement, the Roger Bacon Academy Vikings would be a perfect example.”

“Earning two National Championships, the highest Level 4 score, and the Spirit of Sportsmanship in one night is a phenomenal achievement! I love my girls! Our coaches, parents, and kids have worked like champions. Right now I feel like they got what they deserved,” proclaimed Coach Jean.

Charter Day School, managed by The Roger Bacon Academy, is a tuition-free public charter school offering a traditional, classical curriculum that is open to all North Carolina children. Open enrollment occurs during the month of January, and parents can enroll by going to the school’s web site at http://charterdayschool.net/school/admissions/ Charter Day School and its sister school Columbus Charter School in Whiteville are the top scoring schools in their counties for end-of-grade tests and academic growth. Other extra-curricular activities sponsored by RBA include five Pop Warner football teams, and a nationally ranked archery program with several state, national, and world-ranked champions

Also in the Charter Day School family of schools is the newly opened Douglass Academy in central downtown Wilmington and the South Brunswick Charter School opening in the summer of 2014 for grades k-2. They, too, will be holding open enrollment during January.