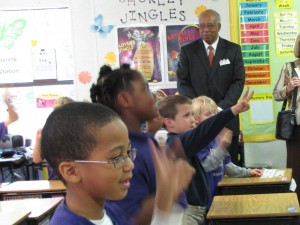 Former N.C. Board of Education chairman Howard N. Lee tunes in to The Roger Bacon Academy.

LELAND, NC: April 13, 2012 – “I’m impressed!” stated Howard N. Lee, former Mayor of Chapel Hill, NC, NC State Senator for 10 years, and Chairman of the State Board of Education. His last appointment was Executive Director of the Education Cabinet under Governor Perdue. Lee made the remarks after touring classrooms on the campus of The Roger Bacon Academy’s Charter Day School in Leland, NC.

Mr. Lee was taken on a walking tour of the tree-lined campus and visited 1st grade and 2nd grade classrooms. Students sang songs to learn sentence structure, and teachers led math skill lessons as Lee observed during his classroom visits. He also met at length with administrators and new Charter Day School Board member Dr. Lee Monroe to talk about The Roger Bacon Academy’s history and operations. Lee was given a presentation of how the management team uses data to ensure every charter school student is reaching their full potential.

“I am just delighted to have the privilege of visiting The Roger Bacon Academy, and I’m so impressed with the work that’s going on here,” said Lee. “Having an opportunity to go into the classroom and to view the kids in action and having fun learning is just an impressive and inspiring experience. I congratulate the leadership, the teachers, and everybody who is contributing to this educational journey for these young people.” 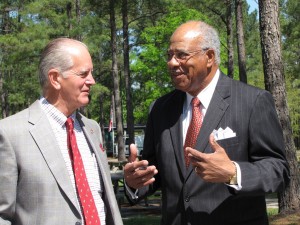 Lee is the founder and president of the Howard N Lee Institute for Equity and Opportunity in Education based in Research Triangle Park, NC. The foundation was established to “organize and mobilize stakeholders and citizens in every community across North Carolina to muster the political will to find ways to insure that all students are successful regardless of the schools they attend…” according to the foundation’s website.

“We are honored that Mr. Lee came to visit us and see how we operate our charter schools” said Baker Mitchell, founder of The Roger Bacon Academy. “His in-depth interest in our process of making successful charter schools went way beyond the usual campus tour, and we recognized that this man truly cares for children.” 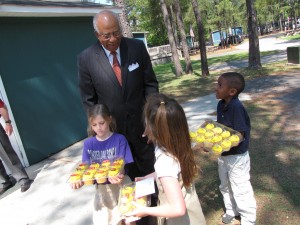 Elementary students at The Roger Bacon Academy visit with Howard N. Lee while they carry birthday cupcakes to class.

“It’s interesting to see what happens when dignitaries are around children,” said Jennifer Beamer, Headmaster of Charter Day School. “During the campus tour, Mr. Lee happened to meet three children carrying birthday cupcakes to their classroom. Upon learning that one of the students was indeed the birthday girl, he spontaneously lead a song of ‘Happy Birthday’ for the entire group. He left everyone smiling for the rest of the day.”

The Roger Bacon Academy schools are tuition-free, open enrollment K-8 public schools in southeastern North Carolina. Since 2000, The Roger Bacon Academy has focused on quality education and is a premier performance-driven year round school. Widely recognized as a compelling choice to conventional public education, the schools have built a reputation for dedicated and highly qualified teachers that give students a strong and proven academic foundation. The Roger Bacon Academy schools have received numerous awards, including the designation of being a Top-25 School for Academic Growth and of Excellence in the state of North Carolina.

LINK: See VIDEO of Lee’s impressions of his tour: 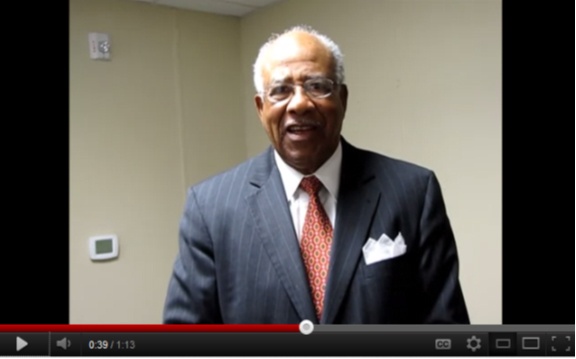