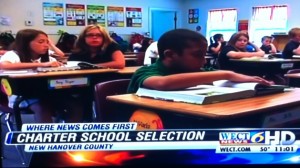 “For every non-profit corporation applying for a charter, the rules published in the instructions require that the board members be selected and named and that the corporation’s bylaws be included in the application. The Council’s attorney stated that applications could not be “added to” after submission. My motion was that the Council stick with the requirements as published within the application instructions. There were several applications that were rejected because required sections were omitted such as in the case of Virgo, and the merits of the ideas in them were not addressed by the Council.”

“Viewers and readers should be aware that charter schools save taxpayers considerable amounts of money.  In financial figures released by the Department of Public Instruction in 2009, Brunswick County traditional public schools received $10,057 per pupil while the public charter school received $7,763 per pupil or $2,294 less per pupil.  Since the public charter school serves over 900 students, this savings amounts to over $2,000,000 each year.  Charter schools are public schools of choice and are tuition-free without any admission requirements to every North Carolina child.  They must administer all state-required achievement testing, and their results are publicly posted. They must also provide all required services for Special Needs children Additionally, since the facilities are privately financed, the taxpayer is not burdened with tens of millions of dollars in bond indebtedness for school buildings. (Ref:  http://www.dpi.state.nc.us/docs/fbs/resources/data/statisticalprofile/2009profile.pdf )”