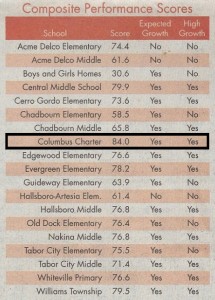 In the wake of last month’s announcement of just how few schools in the state made Adequate Yearly Progress with the federal government’s No Child Left Behind (NCLB) law, the State Department of Education released data showing how school populations and their subgroups actually performed on the reading, math and science components of the state’s end-of-grade tests for grades three through eight.

Nine schools in the city and county showed gains in the all-students reading category – most notably Chadbourn Elementary and Chadbourn Middle schools. 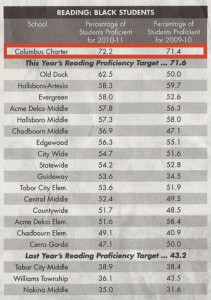 In meeting the requirements for NCLB, the state raised its reading proficiency target to 71.6 percent from 43.2 percent. With the exception of Boys and Girls Homes School, which is not included in the accompanying charts, every school surpassed last year’s reading target goal. However, only three schools – Columbus Charter, Evergreen Elementary and Nakina Middle – met the new target goal in the all-students category. Those three schools plus Old Dock Elementary and Williams Township schools scored higher than the state average.

Boys and Girls Homes School historically has had the lowest scores in the county due to the itinerant nature of its students who seldom stay for an entire year and who enter and/or leave the school during the year. 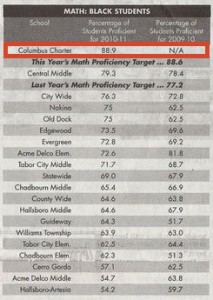 In the all-students math category, eight schools made gains.

The best overall numbers were in science with 90 percent of Acme Delco Elementary’s students scoring proficient.

Only one school – Chadbourn Elementary – made AYP this year and that was done with Safe Harbor, a term used to note that the school had made enough significant gains to qualify even though it fell far short of the state’s target goals in reading and math.

NCLB is an all-or-nothing program. Schools scoring in the 80s or 90s can still fail to make AYP because one or more subgroups have too many students who don’t pass the test.

The Whiteville City Schools Board of Education discussed the situation at its August meeting Monday night.

Director of Curriculum Teresa Carroll presented the results of last year’s testing, noting the subgroups that caused the individual schools that did not make AYP.

At Edgewood, the new math target of 88.6 percent proficient was not met by the all-students subgroup, which had 83.2 percent of its students proficient in that category.

In reading, the subgroups that failed to make the 71.6 percent target were economically disadvantaged students (63.1 percent), students with disabilities (28.8 percent) and black students (58.1 percent).

A student can be in more than one group.

Black students had the highest reading scores at Columbus Charter School, which was the only school to surpass the reading target in this category.

Five schools scored higher than the state average for white students in math.

Black students had the highest math scores at Columbus Charter (88.9 percent) which was the only school where black students surpassed the state’s target goal for math.

Only Williams Township was higher than the state average and no school met the reading target goal.

No school met the math target goal in this category.

It must be noted that all students with an IQ of 55 or higher take the same end-of-grade tests.